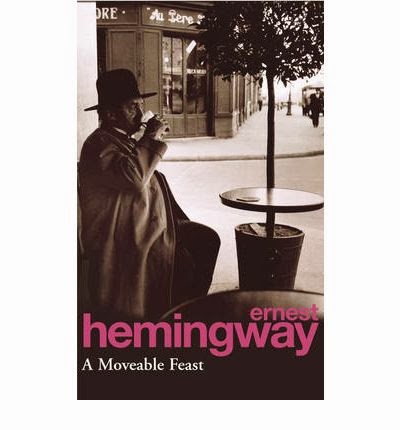 man, then wherever you go for the rest of your life, it stays

with you, for Paris is a moveable feast.

I recently decided to pay a brief visit to Paris, and

in a second hand bookshop. If I'd read it before it must have

been a long time ago, for I didn't remember anything about

it. But these Paris stories give a wonderful account of days

and people, of cafés and writing, which reads almost like a

journal, with its street names and details of café interiors

and bartenders & conversations with people

whose names are so familiar to us now, Sylvia Beach,

seeming-easy flow of days, and streets, bars and talk, is, of

course, part of his craft. He is a supreme storyteller,

his material into a finished product that turns raw experience

Of course A Movable Feast is nothing like a chocolate cake,

resembling it only in terms of allure and delight, (that is, if

because that's the kind of shop window display that would

bring me to a halt, in some Paris street. For it has to be

Paris streets that one imagines, reading A Movable Feast.


And then there's one's own memories of different times,

images from one time moving seamlessly into another. Of

damp mist by the Seine, of frost and yellow leaves on

pavements, of hot sunshine and blue skies and the delicious,

acrid metallic smell of the Metro.

Ce n'est pas pareil, he said. He was standing on the corner of

Boulevard Barbes by Tati, and the busiest metro station in all

of Paris so it seems, Barbes-Rochechouart. I'd just taken a

slip of paper from someone standing 2 or 3 metres away

from him and I wasn't going to take another, thinking they

were the same. But it's not the same he insists, and so I take

his piece of paper too. They are both for wonder-workers,

the first, Maître Charles, the paper says, is medium voyant

guérisseur and the second, Prof. Moro, promises to bring

back a strayed lover within a week.

The light hurtles down the Boulevard Magenta turning

people into misty wraiths, barely visible, except for their

long shadows, thin needles, only perceptible because they

are in movement, like strokes of piano keys, sound 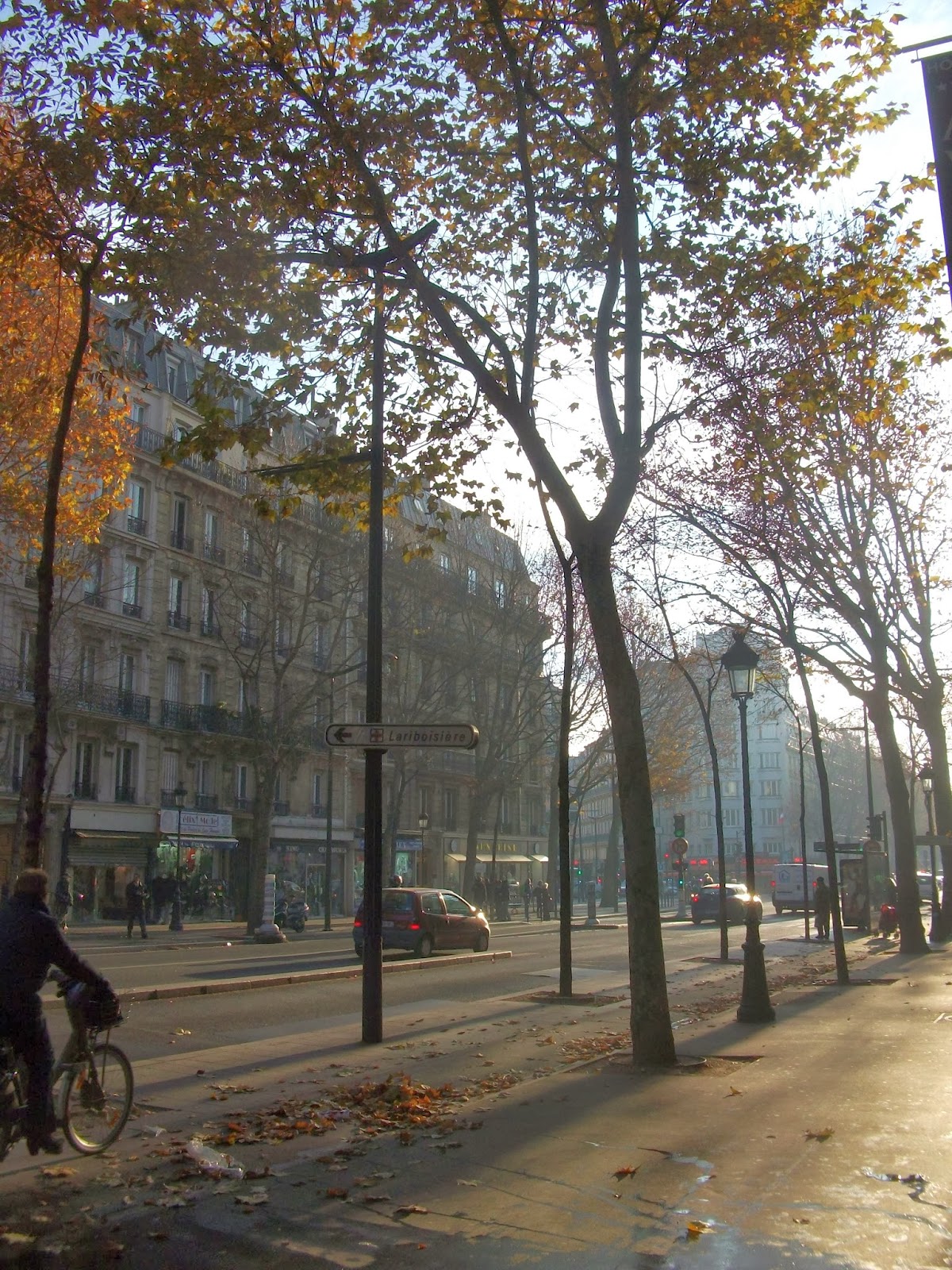 In the Marché Franprix, the man in front of me says to the

looking at the rest of us in the queue, a vous tous, he says. I

heard him say earlier – j'ai beaucoup voyagé, but I didn't

hear where he had travelled. He has white hair, sallow skin,

a smiling face. The young woman smiles back. How

wonderful to be wished good dreams by a friendly stranger.

The elderly man with a paint-spattered shirt is washing the

stairs, slowly. I apologized to him when I came upstairs,

treading on his newly washed steps. He looked neither

displeased nor surprised. He just paused, to let me go past.

My room is on the 4th. Floor. The light in my room is not

working. So I walk back over the wet & shiny stairs,

down to the 3rd floor. I tell the man there's no light in my

room. I hesitate before doing this, as I do not know if it's

anything to do with him. He washes the steps but is he also a

handyman? Does he know how to make the lights work?

Should I bother him, interrupt his work, with my problem?

But I decide to tell him and right away he says attendez, je

descends, reinforces this with a gesture indicating I should

wait, and he goes off downstairs.


I wait on the 3rd floor landing. A couple of minutes later, I

see him coming slowly up the stairs again. I'm concerned

about him, he moves so slowly, his health is clearly not good.

He calls up, asks me if the light is working now. I check it,

and it is. I call back, and thank him.

In the evening, I walk back from the internet café, to the

crossroads at the metro Barbes-Rochechouard which is

quieter now than it was earlier, late afternoon rush hour.

There's a concrete underpass beneath the trains here,

because from Stalingrad they come above ground, perhaps

because of the canal Saint Martin I don't know, but the rails

pass between a funnel of criss-crossing metal, a long bridge,

supported on concrete pillars. So the underpass is roofed by

the loop of railway, and it's an area that's grey and dark,

black stains in the corners, crushed rubbish underfoot, but

you know that no matter how hard people worked, it could

It was thick with people yesterday when I arrived, a clump of

gendarmes by the barriers that fence off the road, and

roaring past just beyond the barrier, and shrieking pulsating

sirens. Today, a pompiers wagon was flashing its blue lights

and sounding its trilling sirens, but the traffic was wedged

tight, there was no room for anything to move out of its way,

and the pedestrian light was on and people were crossing in

a thick black tide, the traffic could not have moved forward

without running into them and they just kept going. 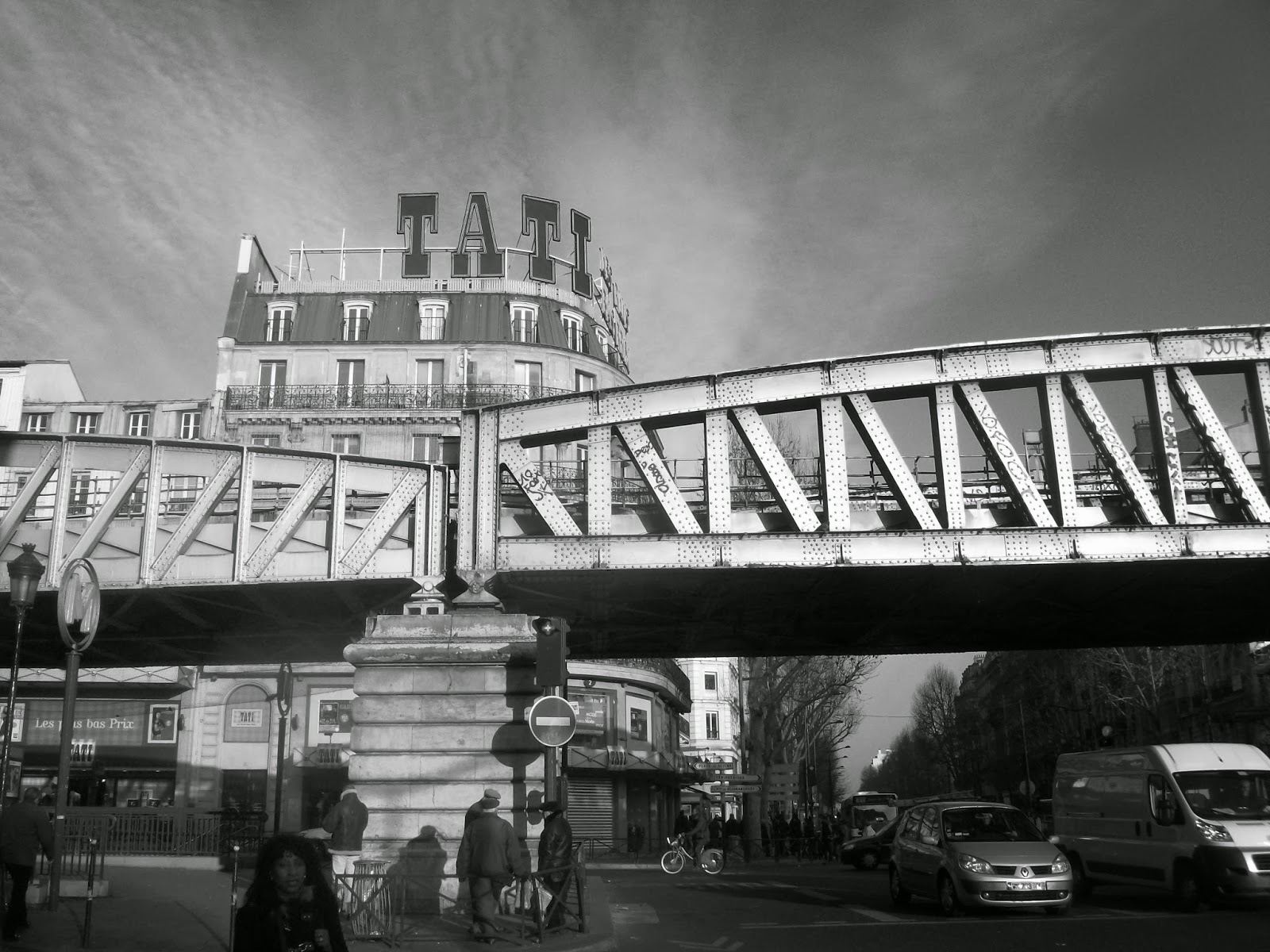 Evening, it's quieter. I cross over to the corner with the neon

sign Tati elevated high above the rooftops and a waterfall of

sparkling white lights draped down the side of the building.

On up the Boulevard Rochechouard, lined with bargain

clothes shops, and turn right up the cobbled street that leads

to Sacré Coeur. Souvenir shops on both sides, with stands

loaded with scarves and hats. And in one of them I find the

calenders I like so much and want to give as presents. They

have the familiar images of Toulouse Lautrec posters of Le

From Sacré Coeur I walk along to canal Saint Martin. I went

there yesterday, walking from Saint Michel to République,

the almost empty square with its many benches under trees,

which would be full of people in the summer, but deserted

now, and the statue of République herself, holding aloft

something that looks like an olive branch though may not be,

but is surely something significant of liberté, égalité and 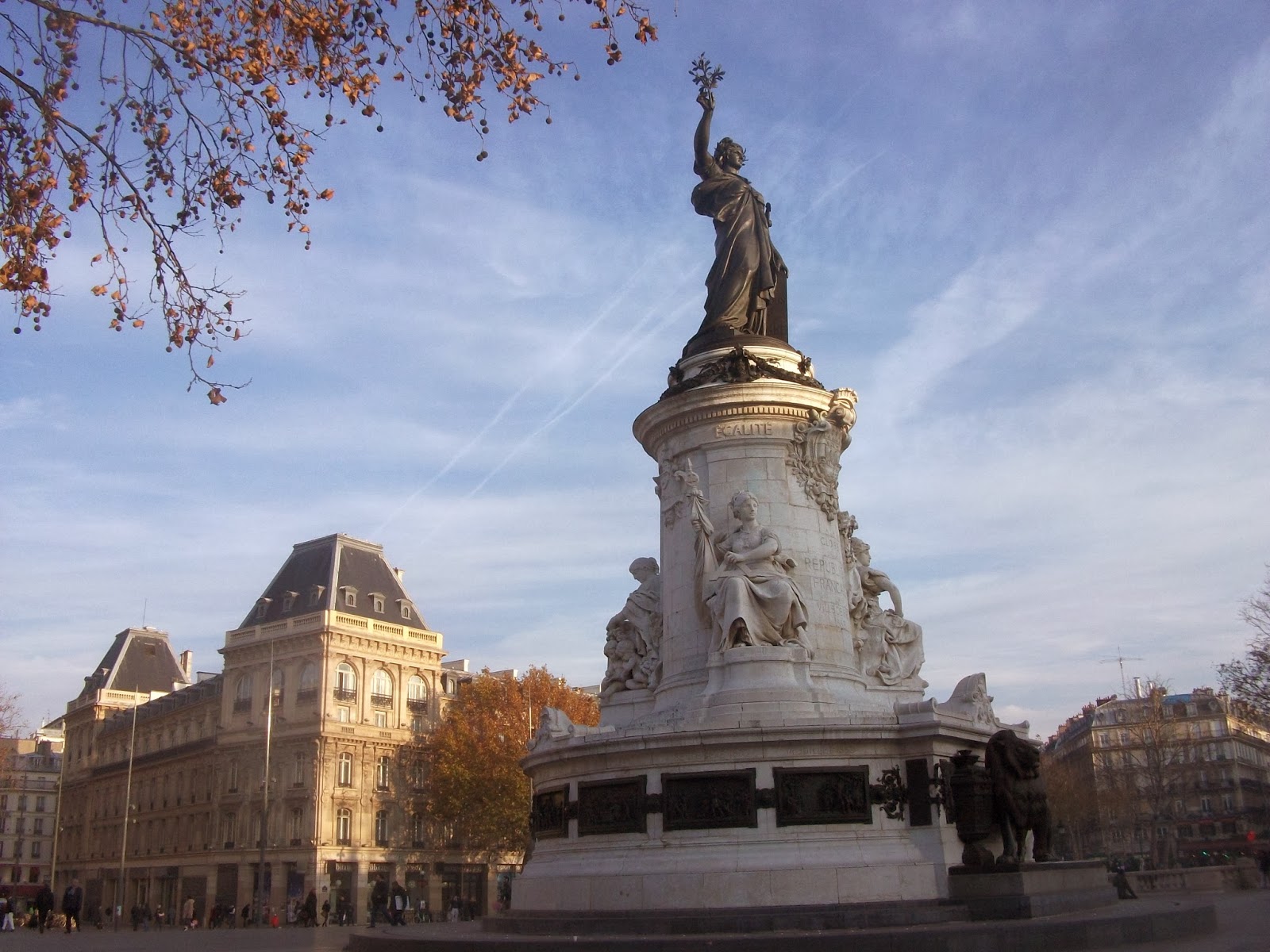 Past the art nouveau metro entrance at Temple, 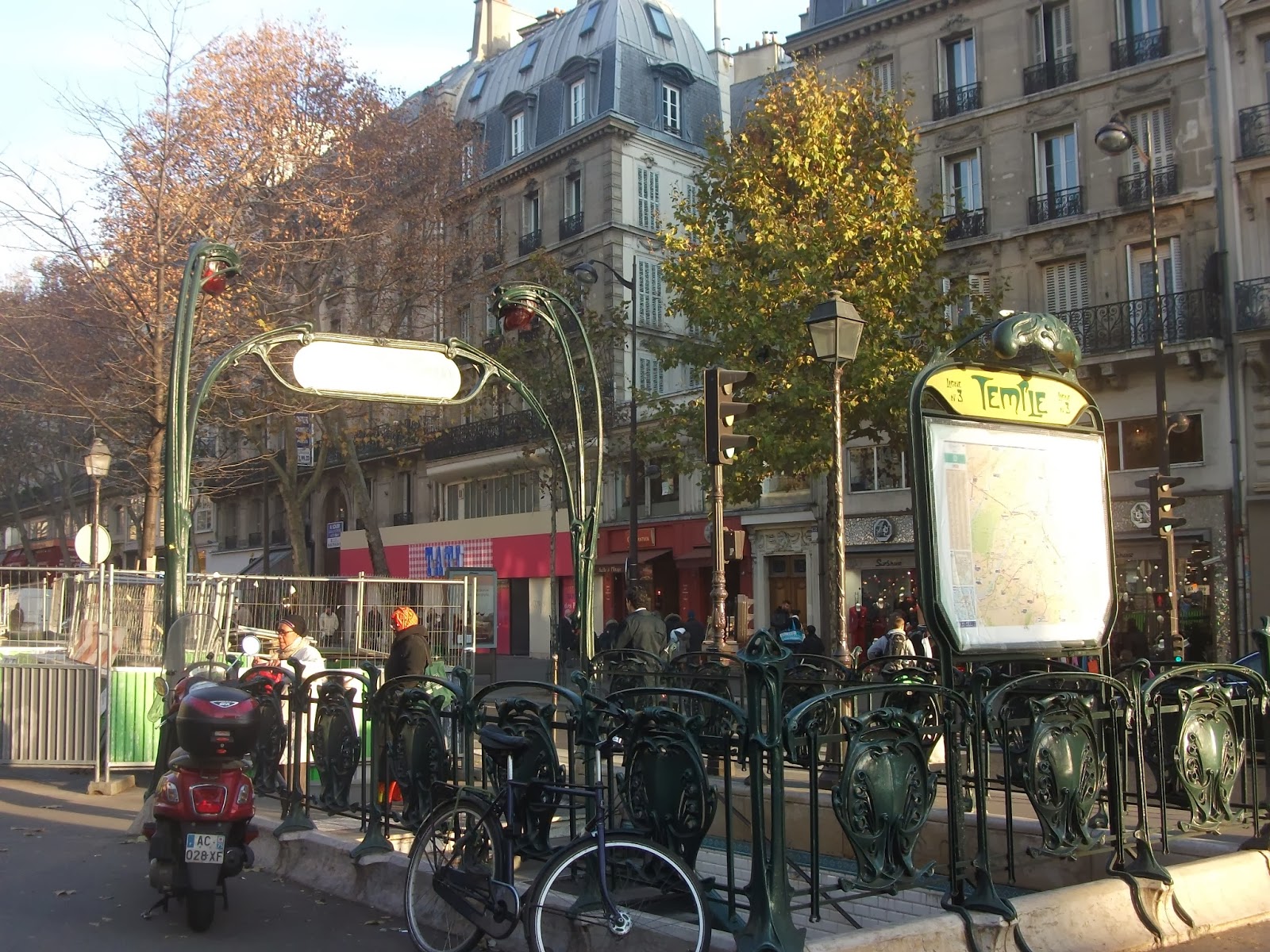 to the tree-lined canal Saint Martin, 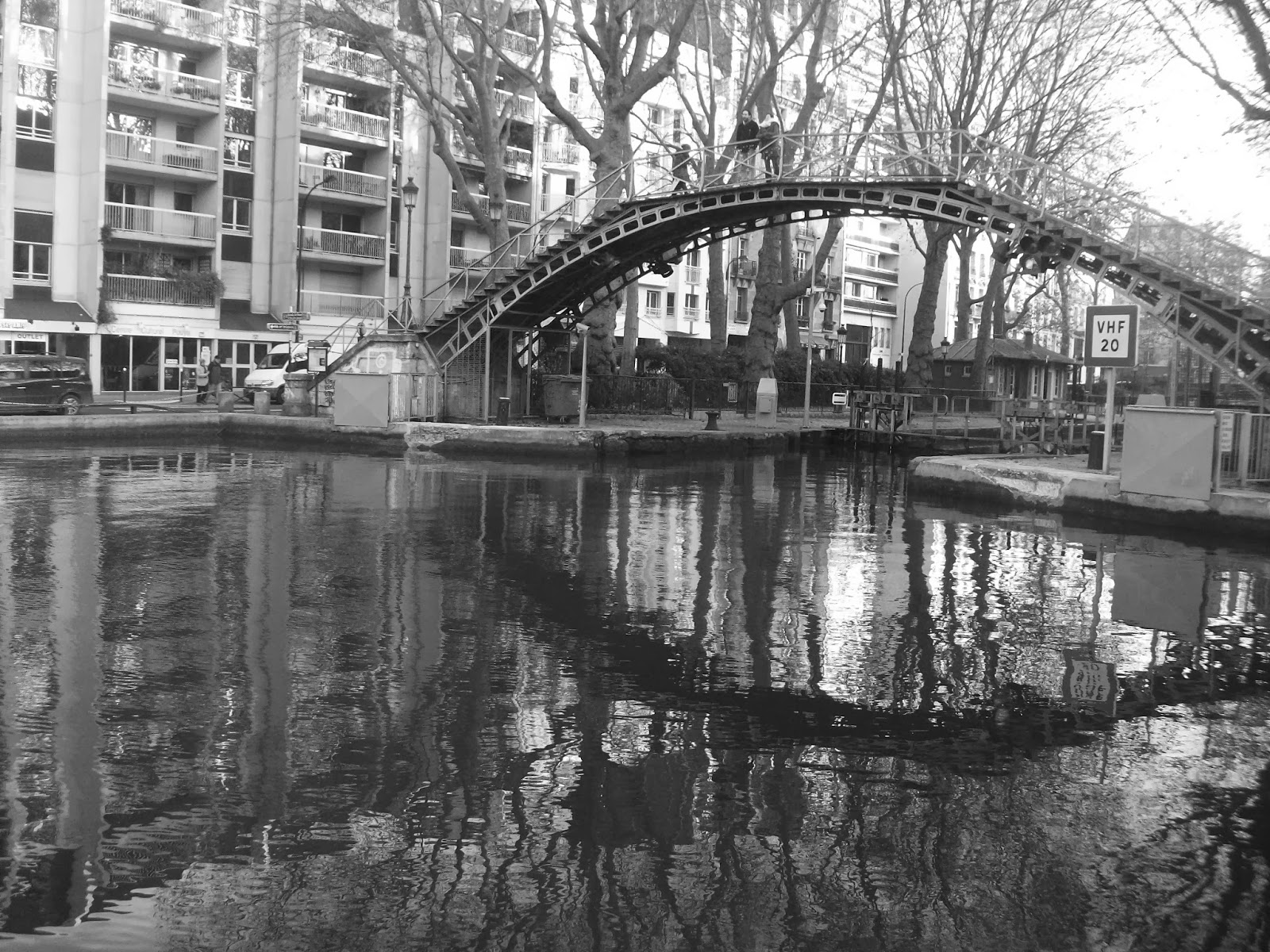 Today I take a different route to the canal Saint Martin, but

it has none of the charm of the Magenta/République walk.

Scaffolding and long stretches of nothing at all and not many

people walking. At one point a crane was demolishing some

buildings. The end of the crane has long metal teeth which

pick delicately at a flimsy plastic partition, and pull it down. 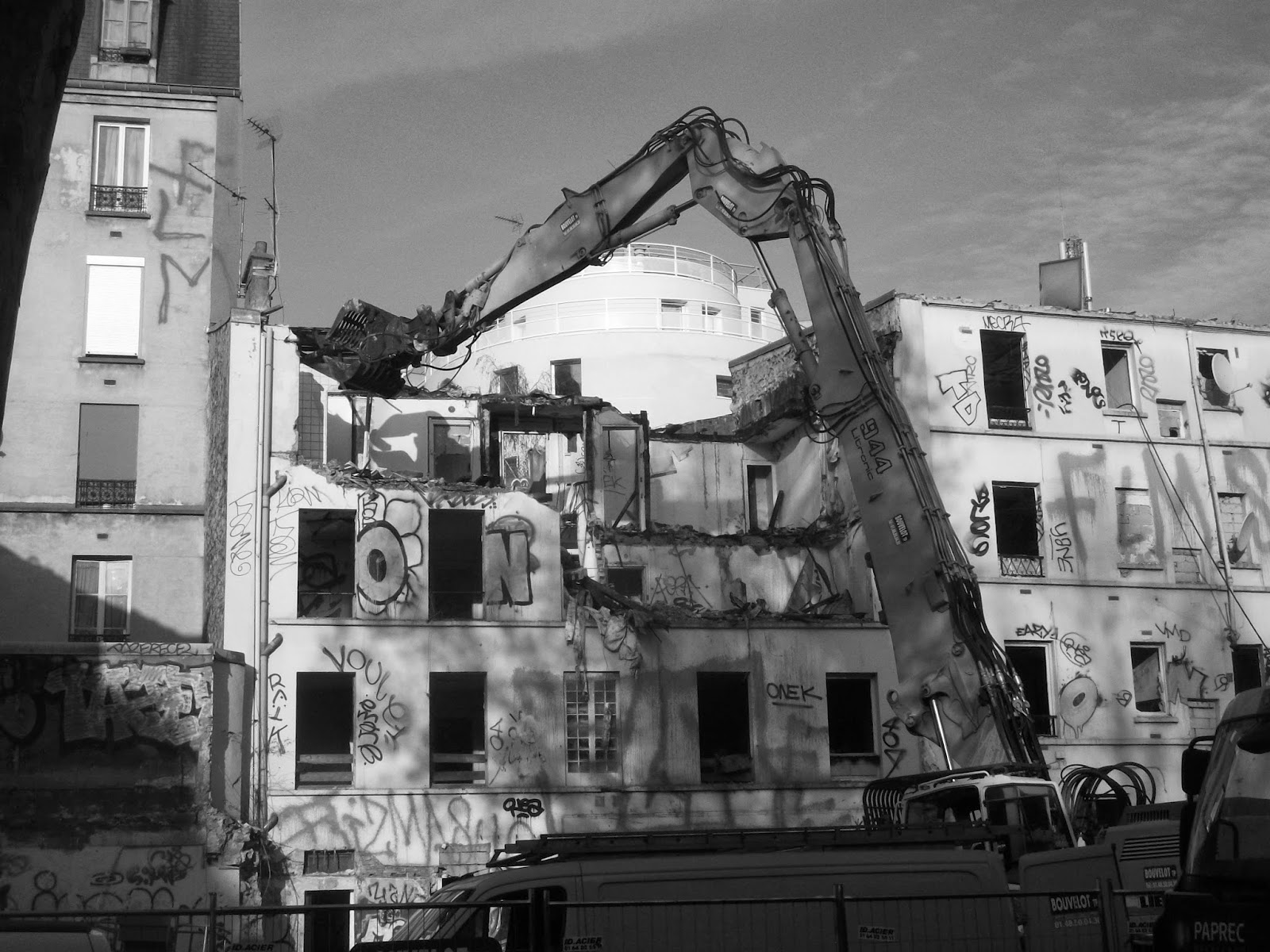 more calendars. The young man in the shop sings along to

the music. When I remark on his happy mood he says C'est

He wants to know where I'm from – He's studied at

Newcastle University he says. He's been to Loch Ness too,

but he knows the monster story is just for the tourists.

It's very good for me this morning, to see someone smiling,

I say it's good for me, his happy, cheerful self.

But he insists it's better for him! La vie est belle! 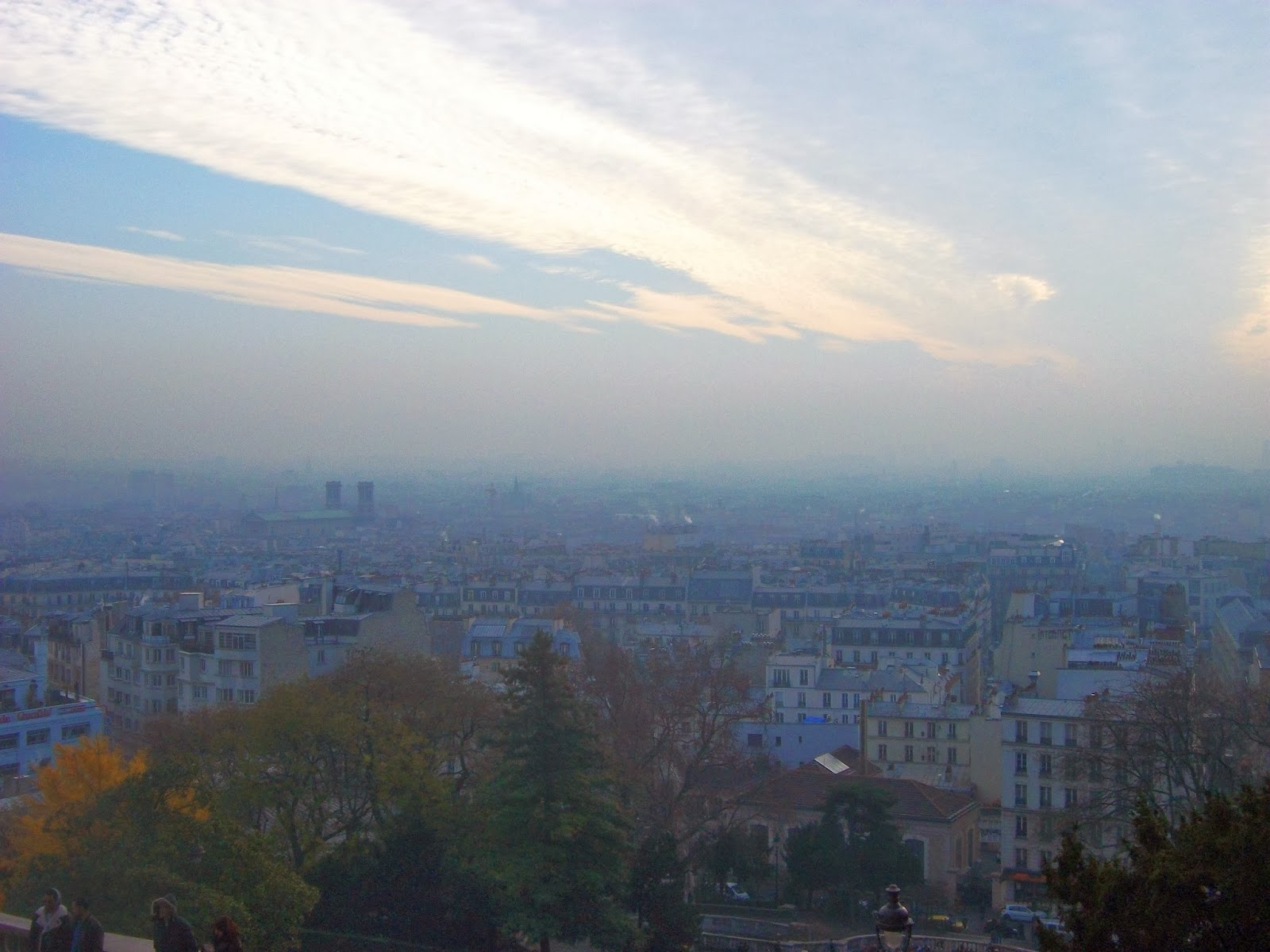 to this notebook and this pencil.”
― Ernest Hemingway, A Moveable Feast

“For a poet he threw a very accurate milk bottle.”

― Ernest Hemingway, A Moveable Feast
Posted by dritanje at 22:38 11 comments: Links to this post

Several years ago I talked with artist friends who I

sometimes worked and exhibited with, about ways of

outside of the usual spaces of art galleries. In Edinburgh's

Festival we are used to seeing art everywhere, performers,

playing on the streets, as well as in buildings so that the line

between art and 'real life' whatever that is, is blurred to such

an extent that you sometimes feel that just walking along a

street is to take part in ongoing street theatre, a spontaneous


I first saw poems on transport systems when

travelling on Dublin's Dart train in the '80s, and I was

delighted when poems of my own were displayed in

Glasgow's Underground in the '90s, and on Edinburgh's

buses. I've written about one of our exhibitions in the Blue

Dolphin post here. And one of the artists has since created a

paintings and wall hangings . I particularly like the way she

has teamed up her paintings with photographs from nature,

which has sometimes been the inspiration for her art.


Cities are places where a lot of people congregate and pass

through, but there are other places where art can be created

Dautais uses the materials he finds in nature to create land

art. These intricate and sensitive creations may be seen by

few people, perhaps by none at all, in their own

environment, but many of us are thankful that he takes

screens, even if we will never see them in their own habitat.

The image reproduced with kind permission by Le Chemin

the quinta, 5-line poem, below, as a response to it.

these berries lean on the sculpture of stone -

red drops of time are the sweetest –

they stretch up to the blue,

Posted by dritanje at 01:20 6 comments: Links to this post 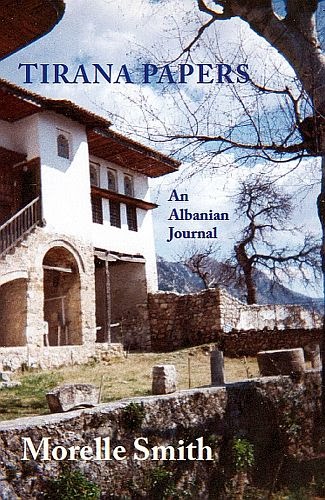 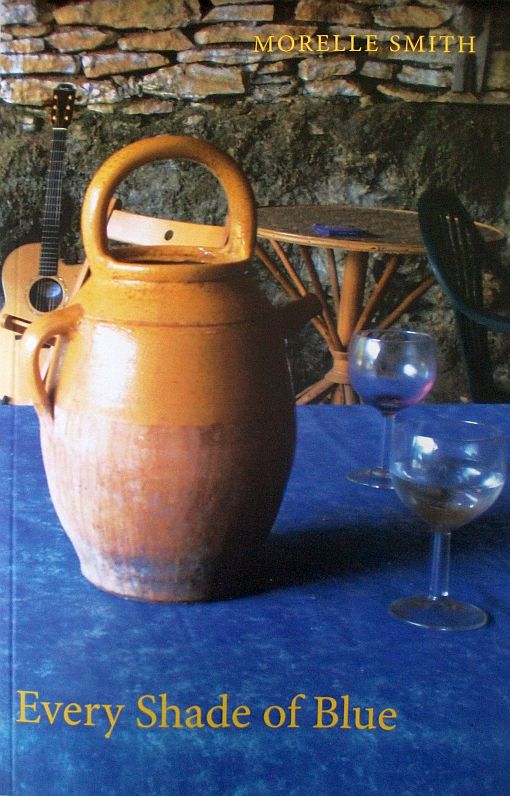 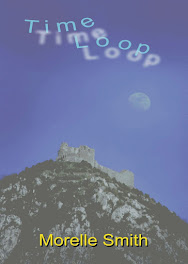 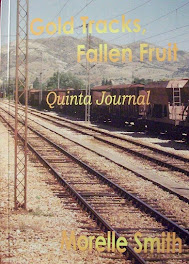 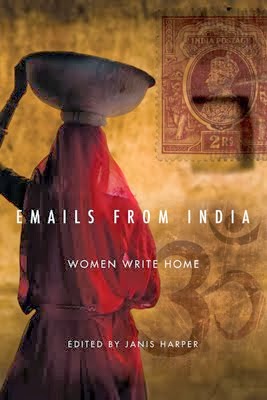